The GHOSTS Framework is an open-source project created by Dustin Updyke, a cybersecurity researcher from the Carnegie Mellon University. It's a framework which offers a way to simulate user activity, usually for cyber awareness trainings or research in the field of cyber defense.

This tool consists of two parts:

Fundamentally, it's also possible to run the clients only but then it's not possible anymore to debug, test and control your simulation. In this article, the main points are not how to set up the server and the clients, because it's already explained in the two following articles which are written by Georgi Nikolov:

It can also be relevant to browse the Ghost Framework User Manual that I've written to help you deploying GHOSTS Framework thanks to my orchestration script. You can also read my How to Use Pypsexec manual if you encounter difficulties to use Pypsexec.

When the Linux server is created, it's important to run it with a bridged connection. Afterwards, we deploy and run the three dockers:

Remark: The easiest way to do it is to run it thanks to the docker-compose

The easiest way to initialize a lot of Windows machines, ready to run GHOSTS, is to create an image of a referential machine with the right settings and prerequisites. The most important prerequisites are:

When this machine is set up, we just have to open X machines from this image and we then just have to know their IP address.

To make this image of a referential client, it asks not so much time and resources. To deploy this image a lot of time to create as many clients as you want, it's also quite easy but what is difficult is to configure these one after another. Indeed, if you want to only use the Framework GHOSTS, you have to configure each configuration file one after the other. Then, when you are going to run the executable ghosts you have to go manually on each client to run it. Afterwards, if you want to manage your different machines you are going to first find which client you want to manage, then you have to find the right JSON configuration file and finally you can modify it. It's also the same if you want to see the state of each machine, you have to go manually on each one.

We notice that for two or three clients it can still be possible to use it alone. Although, if you want to deploy a lot of client machines, it becomes very difficult, even impossible. Therefore, I implemented an orchestration script, containing some scripts with different function, in the Server where the three dockers already run. The main advantages of this script are:

The orchestration script can be found here. It's divided into several scripts and each one has a specific task. As you can see on the following picture, one of them is for the configuration, one is for the management of the timeline in real-time, two others are to run and stop GHOSTS and the last one is to configure and then run GHOSTS.

As we can see, there is a single script, on the client, but you don't have to add it yourself or to change something in it. Indeed, when you run the configuration of all the clients, the first thing that the server will do is to check if there is already the right script and if it's not the case, it will be added.

All the client's configurations are made from the server, so the configuration is very centralized and you don't have to make several times the same configuration for all the machines. The server contains two important JSON files called IPaddress.json and configServer.json.

You have different settings and some of them will be browsed here after:

On the following picture, we can see the file configServer.json, for readability, the different parts have been numbered. 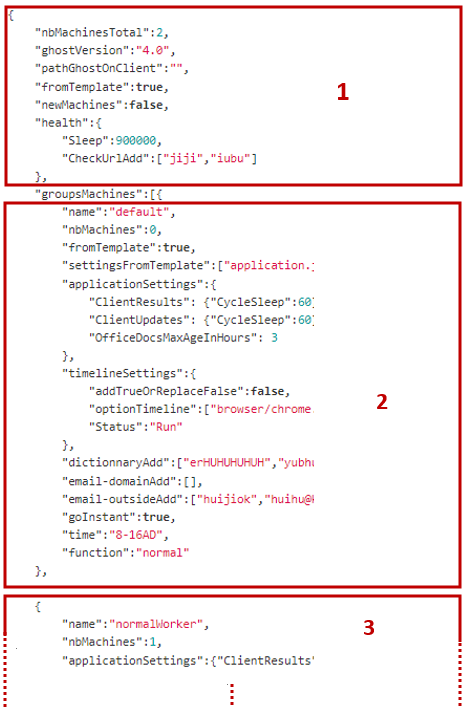 If you want more information about the different settings, don't hesitate to go check this in the User Manual that I've written ( Ghost Framework user manual. )

To manage the activities of the clients in real-time, the first thing to do is to configure the JSON file changeTimeline.json. You can see it in the following picture 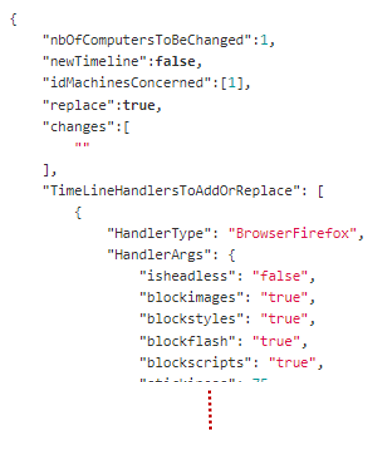 nbOfComputersToBeChanged is for how many machines you want to update, newTimeline is to chose if the new timeline should be done from a template or from the timeline already on the client. idMachinesConcerned is to change the right machines. The boolean replace is just to say if you want to replace the timelines or to add it. TimeLineHandlersToAddOrReplace is the update itself so you have to respect the structure of the normal timeline.json

For these two scripts you don't have to modify a JSON file, but you can still choose for some options. For example, if you want to stop only 2 machines you just have to run

Indeed, you have 4 different modes that you can choose: (X is a number and Y is a json file)

This one is simply running first ServerInit.py and is going to follow with runningGhostRunner.py -a

Defining cyber attacks is a difficult task. They vary in origins, goals and, at first glance, the techniques used might seem very different. Luckily a popular model was defined by Lockheed Martin, still used to this day, which illustrates very well the lifecycle of a typical cyber attack. The Cyber Kill Chain, popular but controversial, defines the 7 principal steps of an attack. There have been many advances, since its original conception, one of which is the wildly acclaimed ATT&CK Matrix for Enterprise.
Apr 7, 2022 | 374 views

For years, hackers have been the main characters of movies, books and generally have captured the imagination of regular folks. When we see these hackers use the tools of their trade, we usually see a black screen with green text flashing as fast as possible on the screen, lost in commands and bright flashing lights. This can't be any further from reality, as most hackers will spend hours and days on end to accomplish their tasks, usually staring at a screen, using their programs of choice.
Mar 8, 2022 | 370 views

Some time ago I wrote a blog about Installing Linux Bash Shell (and Metasploit) on Windows 10. This is great, when we want to enjoy the best of both worlds- keep using Windows, with its out-of-the-box configuration and set-up, and still be able to use the powerful tools available for the Linux distribution. In my previous blog I went through the steps necessary for setting up WSL and installing an Ubuntu and Kali Linux distribution. Since then, a lot of advancements have been made to facilitate the use of these distributions for Windows Users.
Nov 19, 2021 | 827 views