How does WPA/WPA2 WiFi security work, and how to crack it?

The number of Wi-Fi access points is bigger day after day. Everywhere in the street, it is possible to see a lot of Access Point (AP) 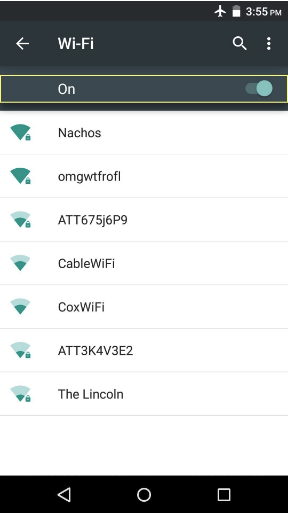 It is very important to set up strong security on your Wi-Fi AP to avoid someone connects on your local network and intercept all (or a part) of the traffic.

In 1999, the WEP (Wired Equivalent Privacy) was introduced. It was deprecated in 2004 after some researchers discovered flaws in the design of the protocol. Currently, it is really easy to crack a WEP password. With the right tools, it requires only a few minutes.

The Wi-Fi Alliance defined the WPA (Wi-Fi Protected Access) in the response of weakness found in WEP. WPA became available in 2003 and WPA2 (a little improvement of WPA) in 2004.

In 2018, the Alliance announced WPA3 as a replacement of WPA2. But currently, the WPA2 is the most used protocol to secure Wi-Fi AP.

How does work WPA/WPA2?

WPA and WPA2 are very similar from an authentication perspective. We will use the global term "WPA" and point the difference between the two when it is necessary.

WPA can be used in two different modes:

This article is about the WPA-PSK mode. This protocol uses a single pass-phrase (PSK) for authentication to the network, shared among all devices and the AP. The PSK is between 8 and 63 characters in length. Because of this unique PSK, if an attacker can find it, he can access and expose all client devices on the network.

From this PSK, each device derives, and store, a Pairwise Master Key (PMK) until the PSK or the SSID (access point's name) change.

When a client tries to connect to an authenticator, a protocol called 4-ways handshake is initialized to generate a Pairwise Transient Key (PTK). This key is used to encrypt data between a client and the AP and change at least as every 65,535 packets. It is an important improvement compared to WEP.

The following sections will describe more precisely the PMK generation, the 4-way handshake and the PTK generation.

First, all devices derive the Pairwise Master Key (PMK) from the PSK.

The PMK is computed by using to PBKDF2 (Password-Based Key Derivation Function 2) that is a key derivation function. This kind of functions is used to reduce vulnerabilities to brute force attacks because of the high computational cost.

The PMK is composed of the first 256 bits of the result of the computation. This step is performed once by all clients and the AP and the result is stored until the pass-phrase or the SSID change.

The 4-way handshake provides mutual authentication based on the shared secret key PMK and negotiates a fresh session key PTK. The PTK is derived from the PMK, two nonces, the MAC addresses of both the client and the authenticator. This 64 bytes PTK is split into:

During the handshake, every message is defined using the EAPOL frames. The following figure is the layout of an EAPOL frame.

Most of these fields are important during the handshake, but we are specifically interested by the key nonce and key MIC fields in order to crack the pass-phrase. For more information about the EAPOL frame, see [3] and [4] 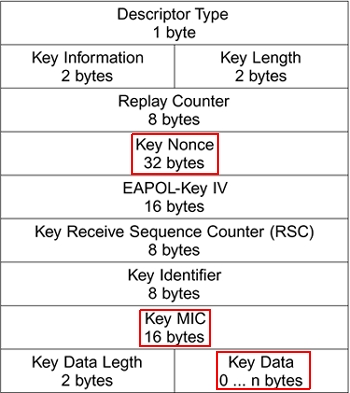 The following figure represents a 4-way handshake. The figure is willingly simplified for better comprehension. There is no mention of the Group Transient Key (GTK) for example. 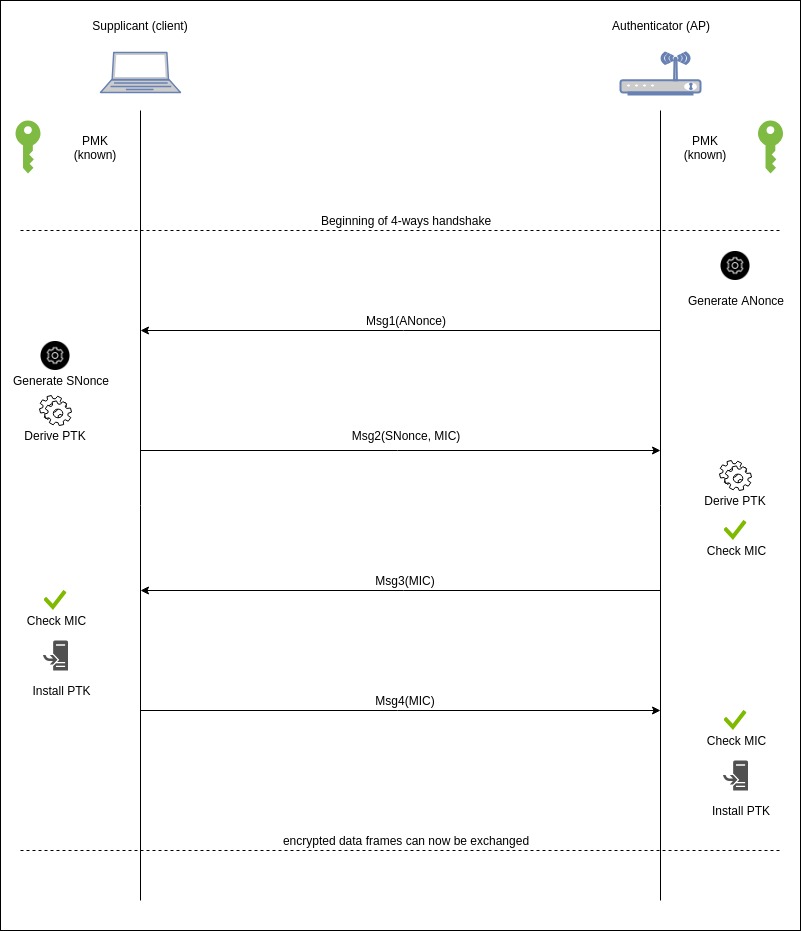 The different steps are:

After these steps, all messages are encrypted using the TK.

At least as every 65.535 packets, the PTK is refreshed, but if the Supplicant and the Authenticator are already communicating, they use the current PTK to exchange data for the new PTK.

Sniff a 4-way handshake is enough to build an offline attack and try to find the passphrase (PSK).

An attacker observes a client connection and obtains:

For each PSK guess, the attacker computes the PMK' and the PTK'. It uses his PTK' to compute a MIC' for packet 2, 3 or 4 of the handshake. If the computed MIC' is equal to the MIC of the packets, the PSK guess is correct.

The following figure describes the process to crack the password.

Several tools can be used to perform this attack. The suite of tools Aircrack-ng provides all elements necessary to crack a password (airodump-ng for capturing packets, aircrack-ng to perform a dictionary attack, airdecap-ng to decrypt packets).

To perform the attack, we used another tool: bettercap [6]. This tool, written by evilsocket [7] [8] in Golang. It is a rewriting of the famous ettercap command-line tool. Bettercap has a lot of features like WI-Fi network scanning, BLE devices scanning, ARP-DNS-DHCpv6 spoofing, network sniffer, port scanner, REST API,... Bettercap provides also an easy web interface.

The first step is to set your Wi-Fi interface in monitor mode to be able to scan all channels. A lot of built-in Wi-Fi cards support monitor mode.

The command to set the interface in monitor mode is:

bettercap is launched to be used with wlp4s0mon interface. You should see something like the following figure.

The following commands run a scan of all Wi-Fi channels and display the result in a table. 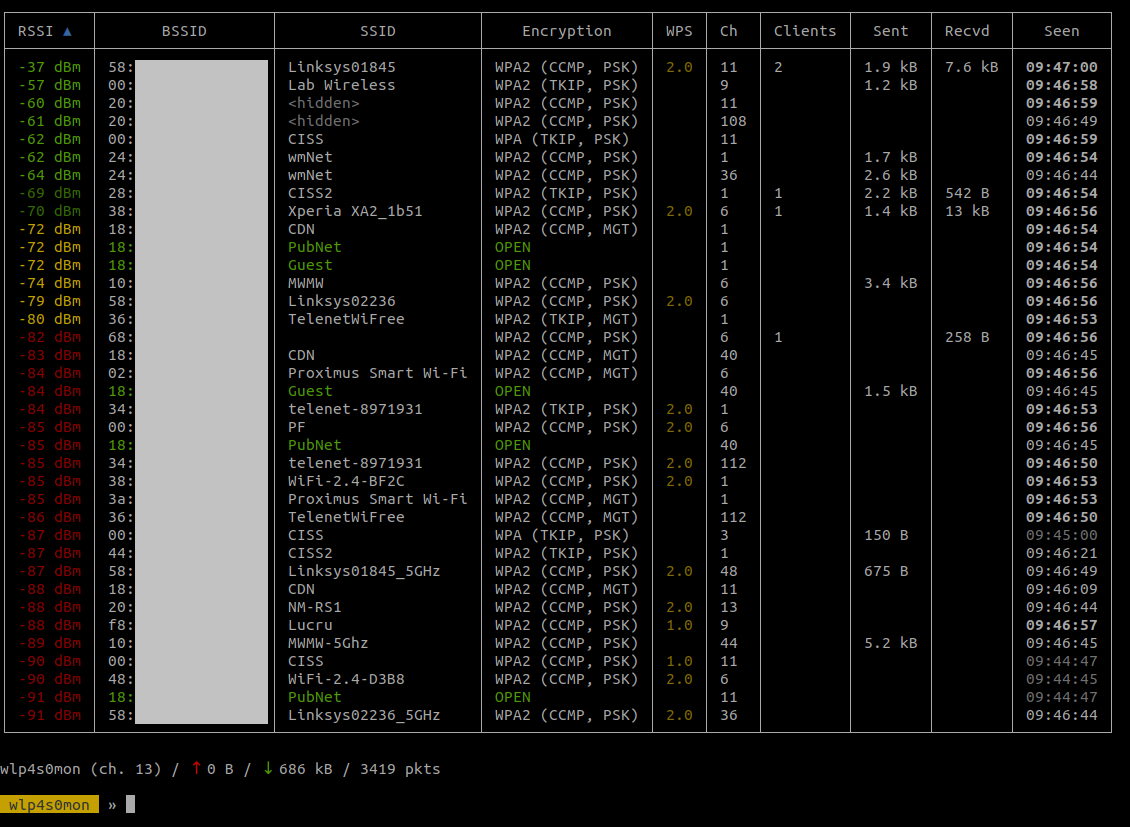 In this example, we tried to find the password for the SSID Linksys01845. The channel used is the 11 and there are 2 clients connected on it. To avoid jumping to other frequencies and potentially losing useful packets, we will scan only the channel 11.

Capturing a 4-way handshake requires a client to connect to the network. Waiting for that can take a lot of time. To avoid this waste of time, we can use a de-authentication attack.

The protocol 802.11 (Wi-Fi) provides a mechanism to, originally, de-authenticate any rogue client on a network. The Access Point sends a frame to the client and it will close the connexion. The problem is, de-authentication frames are not encrypted. It is easy to forge fake frames by spoofing the origin MAC address (AP MAC address).

Bettercap is able to forge fake de-authentication frames and broadcast them to all clients on a network. Thanks to this, all clients will close their connexions and they will initiate a fresh 4-way handshake.

To perform a de-authentication attack, the command, in bettercap, (replace 58:xx:xx:xx:xx:xx by the MAC address of the target AP):

Once the clients will reconnect, bettercap will capture the need EAPOL frames of the handshake and store it in a pcap file.

Different tools are available to crack the handshake. It is possible to do that with aircrack-ng, Pyrit project or hashcat. We used hashcat [9] (a tool to recover many different types of hashes) because it is very well documented, very powerful, supports a lot of different hardware and uses multi-threads.

Hashcat works only with .hccapx file. To convert pcap file to hccapx file we can use an online converter or hashcat-utils locally.

We are now ready to run hashcat and try to crack the password.

The previous example of command has 4 important parameters:

Concretely, with this command, we try all 8-lowercase letters combinations.

The file rockyou.txt is a famous file that contains around 15 million leaked passwords.

It is also possible to use a dictionary file in combination with a rules file. For example, classical rules are to replace the E by a 3 or A by a 4.

Theoretically, it is possible to crack any WPA/WPA2 protection. But because of the high computational cost of the hashes, it is not feasible for password longer than 12 or 15 characters.

A few years ago, the Proximus Internet box (B-Box) used 8 capital-letters length passwords. With the current classical hardware, it takes around 20 days to complete a brute-force attack. The new routers of Belgian Internet provider (Proximus, Telenet, VOO, ...) use a 12 characters password (digits and lowercase letters). A brute-force attack would take several years and the interest of founding the password would be null.

To illustrate the necessary time to crack a WPA password, we performed a performance analysis. We ran hashcat on three kinds of hardware and we tried to crack different types of password with brute-force and dictionary attacks.

The attacks we performed:

The results are synthesized in the following table

We can note that GPUs are better than CPUs for computing hashes. We note also that for password with more than 12 characters, brute-force attacks are not very interesting even with very good hardware.

It could be interesting to estimate the price of this attack. A Google Cloud server with 4 Nvidia Tesla T4 cost only 2.72$/hour. A dictionary attack with OneRuleToRuleThemAll cost only around 400$. It is expensive for a single person but it is cheap for an organization, government, company,...

We can now answer the question: is it possible to crack any personal WPA/WPA2 password? Theoretically, yes, any WPA/WPA2 system is vulnerable to this attack. Practically, it is not always possible to recover the password in a reasonable time.... currently! Maybe in a few years, the hardware will be able to crack a 50 characters password in few hours...

To protect your network, use a random password with, at least, 12 or even 15 characters. It is also a good idea to change the password sometimes to render inefficient an off-line attack.

In the first part of Mitre Att&ck in Practice, the Att&ck Navigator and the Atomic Red Team were presented. The Navigator allows to interact with the Att&ck Matrix in a very flexible way. The Atomic Red Team (ART) is a collection of code snippets designed to actually carry out Techniques. The link between an Att&ck Technique and the ART is easily done via the Technique IDs.
Oct 21, 2022 | 154 views

One of our previous blog post presented the Mitre Att&ck Framework and the associated Mitre Att&ck Matrix. This post is the first of a set of three that will present how to link the Mitre Framework with open source tools to design and test offensive actions in practice.
Jul 14, 2022 | 1030 views

arp-scan is a simple tool that can be used list the IP addresses (and devices) used in a network. It works by sender ARP 'who-has' requests for every IP address of the subnet. If the IP address is used by a device, it will reply with an ARP 'reply' packet.
Jun 5, 2022 | 954 views
This website uses cookies. More information about the use of cookies is available in the cookies policy.
Accept