Sending emails relies mainly on SMTP, the Simple Mail Transfert Protocol. This protocol is actually quite old: the first traces date back from the 70's, and the first standardisation took place in 1982 (RFC 821). It is primarily a very simple and insecure protocol, although multiple additional protocols have developed to protect emails and avoid SPAM. In this blog post we review these different protection mechanisms.

But first, how are emails supposed to work? 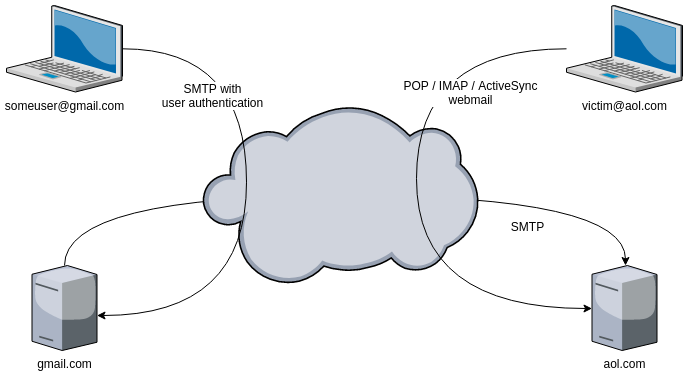 The communication between the sender (someuser@gmail.com) and the mail server (gmail.com) relies on SMTP, but it is usually well protected: the user has to provide a username and password, and most providers enforce the use of TLS encryption.

The communication between the recipient (victim@aol.com) and his mail server (aol.com) can take place using different protocols like POP, IMAP or ActiveSync that all require a password. This communication is usually also protected using TLS encryption.

However, between the mail servers, there is no authentication, and there is usually no encryption, only pure old SMTP and trust.

So, how can an attacker use this lack of authentication and encryption between the two mail servers?

The first and most obvious possibility is SPAM, or undesired email. Any device connected to the internet, anywhere in the world, is allowed to send emails to aol.com. Hackers can perform this action by either renting cheap servers or using a botnet : an army of compromised servers, computers or IoT (Internet of Things) devices. 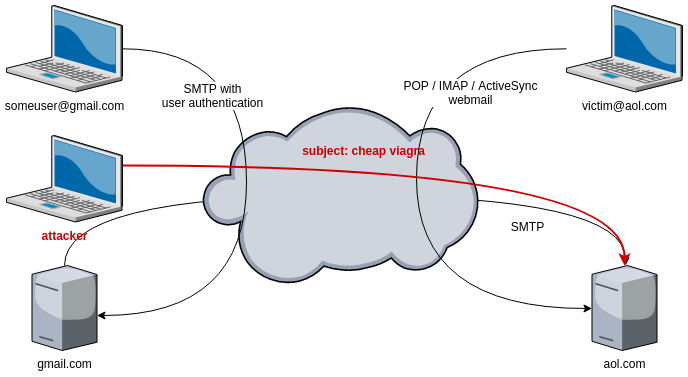 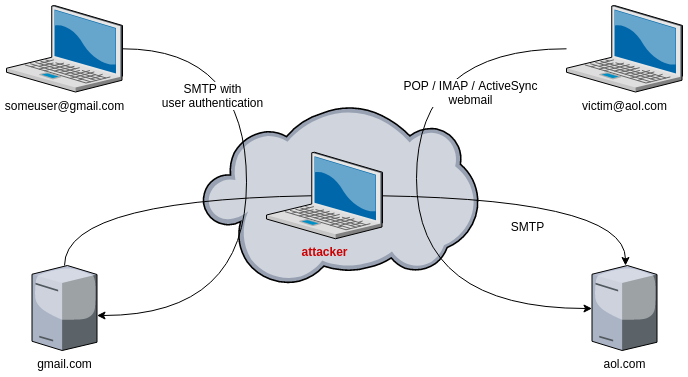 As there is no authentication between the mail servers, anyone can send an email to victim@aol.com, pretending to be someuser@gmail.com. 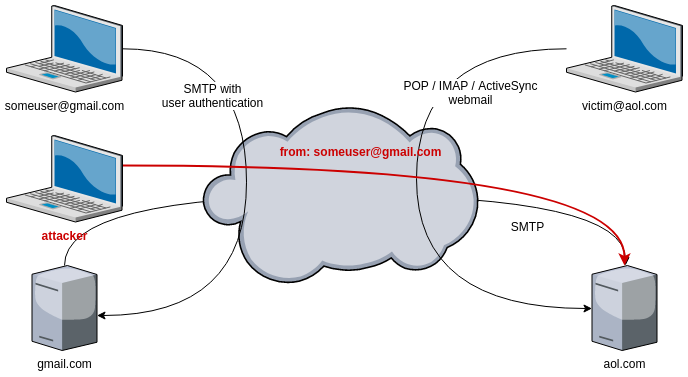 Even if there is a protection against address spoofing, like DKIM (see below), the attacker may use a domain name that looks similar to gmail.com, like gmall.com. If victim@aol.com is not attentive enough, like on a Monday morning before his first coffee, he might not notice the incorrect from email address.

It is especially complicated with Internationalized Domain Names (IDN) : domain names may contain non-ASCII characters that look very similar to classical ASCII characters. A classical example is Cyrillic character a (unicode U+0430), that looks identical to Unicode character U+0061 (Latin small letter a). 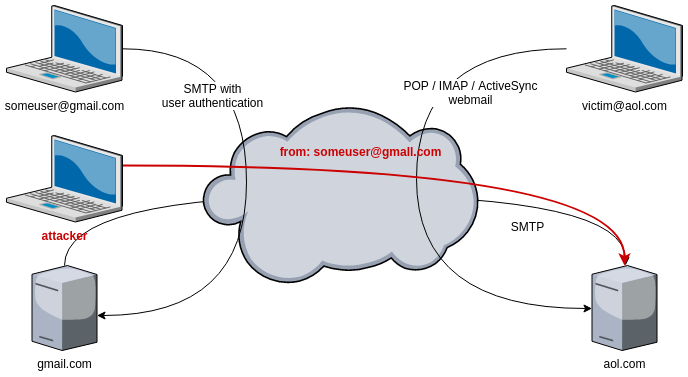 Over time, some protection techniques have been implemented...

The first protective measures are simple to activate, because they take place only on the receiving server. However, they are absolutely not bulletproof!

With content analysis, the receiving server can block emails based on content and keywords like viagra or rolex. This is the most ancient technique used to filter SPAM.

If a server (IP) is found to send SPAM or fake emails, it's IP can be added to a blacklist. Such lists can be found online, like spamhause SBL. Receiving servers can use these lists to block incoming emails.

A lot of SPAM protection services like Barracuda Spam Firewall check the creation time of the source domain and block emails coming from a recently created domain (less then a few weeks of months). This allows to protect the receiver from spammers that quickly created a new domain to send spam.

With DKIM, the sending email server will add a signature to the email, using a private key.

The corresponding public key, that the receiving server can use to verify the signature, can be fetched using a DNS query. 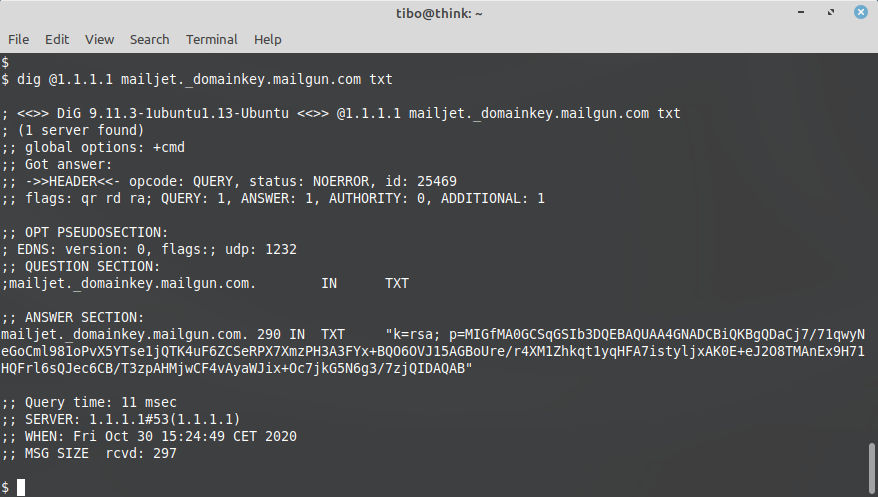 This allows to ensure that the email has not been altered during transmission between the two mail servers, and thus guarantees integrity.

With SPF, the administrator of the sending domain (gmail.com) can configure a special DNS record that specifically lists servers that are allowed to send emails from this domain (@gmail.com). The receiving server can check the DNS server to verify that the sending server is allowed to do so. 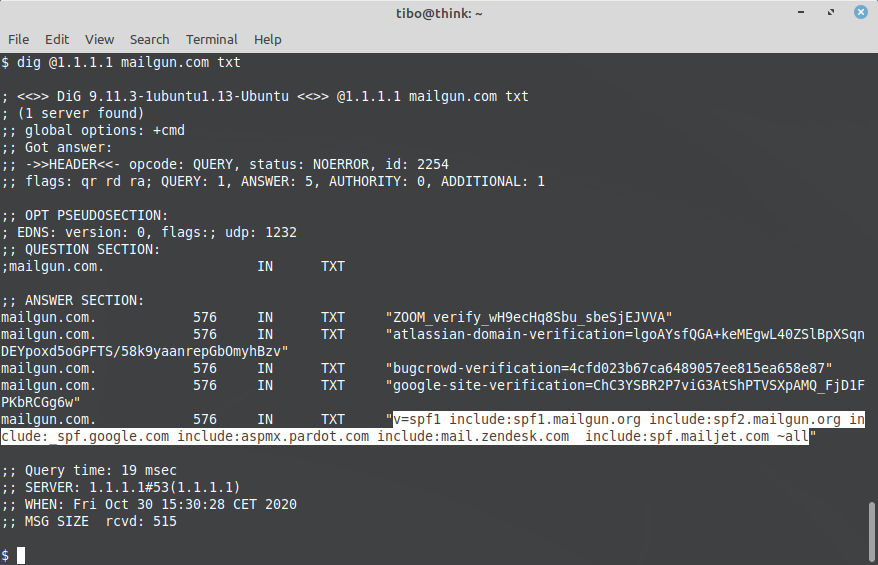 This technique protects against address spoofing.

DMARC builds on top of SPF and DKIM. It also relies on a DNS record, to indicate if a sending domain is using DKIM and/or SPF. The DMARC DNS record can also give instruction on what to do if one of these mechanisms fail, and how to notify the sender domain in case of failure. 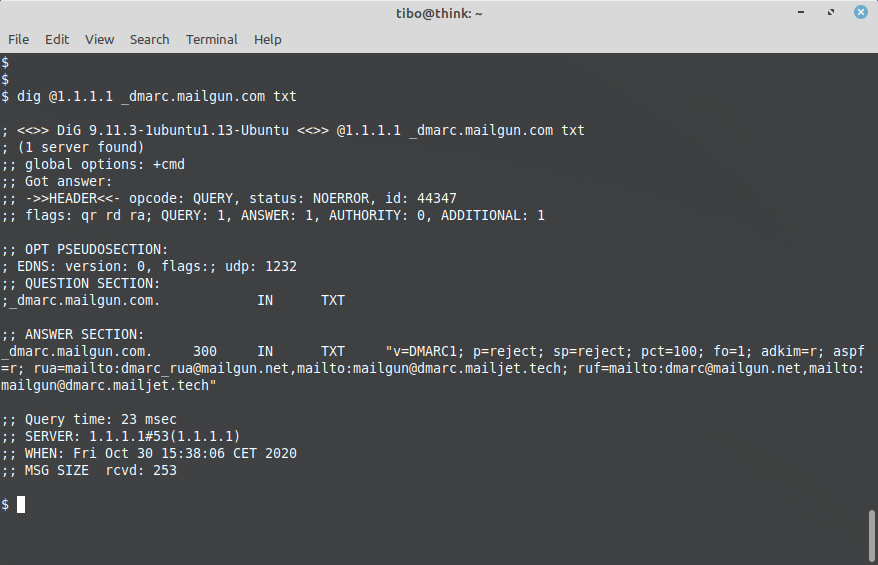 The receiving email server can check that the IP address of the sending server does actually belong to this domain. It does so by performing a reverse DNS lookup: 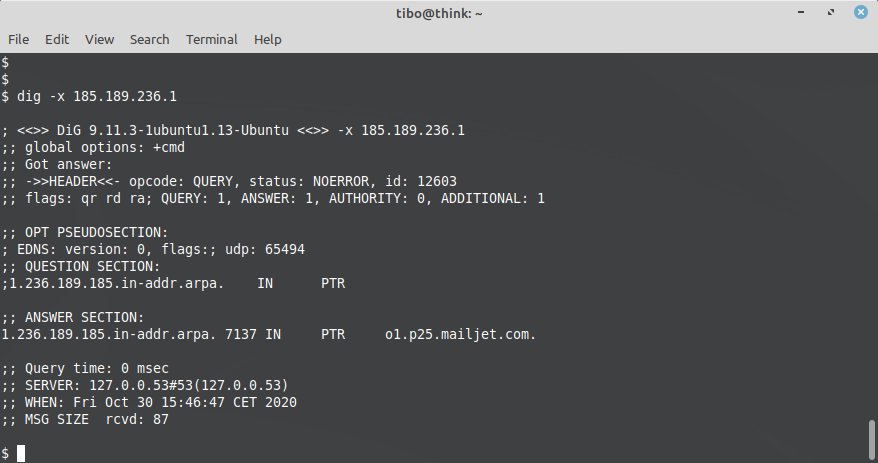 Unlike SPF, DKIM and DMARC, reverse DNS checks require the administrator of the sending domain to add a DNS PTR record in the DNS server that is responsible for the public IP addresses of his servers.

This acts like a whitelist (as opposed to the blacklists mentioned above) and protects the receiver from a spammer that is using compromised devices and botnets.

Of course, it requires both servers to support TLS, but nowadays this is the case for most providers (Gmail, AOL, gmx.de etc.) and it is also supported by most mail servers like Postfix.

Different techniques exit to protect users from malicious emails. However, none of them is bulletproof. Moreover, some of these techniques (like domain age and reverse DNS check) may block legitimate emails. In anyway, for the time being, you should never blindly trust an email!

Web shells and the dangers of unrestricted file upload

In previous blog posts, we have already illustrated two web application vulnerabilities: brute force login cracking and SQL injection. In this post we illustrate a 3rd vulnerability, unrestricted file upload, and show how it can be exploited using a web shell.
Jan 26, 2023 | 211 views

In this blog post, we will show that a login page from a web application can be easily cracked if the application does not implement specific protections against this kind of attack.
Jan 24, 2023 | 219 views

Code injection is one of the most critical web application vulnerabilities. Indeed, the consequences of code injection can be dramatic (impact). Moreover, still today a lot of web applications are vulnerable to code injection (frequency). Finally, some tools like SQLMap allow to automatically detect and use these vulnerabilities (exploitation). For this reason, the vulnerability is listed in the top 10 published by the Open Web Application Security Project (OWASP) [1]. In this blog post, we will present one type of code injection, called SQL injection, and we will show how to perform a SQL injection attack with SQLMap.
Jan 11, 2023 | 325 views
This website uses cookies. More information about the use of cookies is available in the cookies policy.
Accept