Some time ago I wrote a blog about Installing Linux Bash Shell (and Metasploit) on Windows 10. This is great, when we want to enjoy the best of both worlds- keep using Windows, with its out-of-the-box configuration and set-up, and still be able to use the powerful tools available for the Linux distribution. In my previous blog I went through the steps necessary for setting up WSL and installing an Ubuntu and Kali Linux distribution. Since then, a lot of advancements have been made to facilitate the use of these distributions for Windows Users. 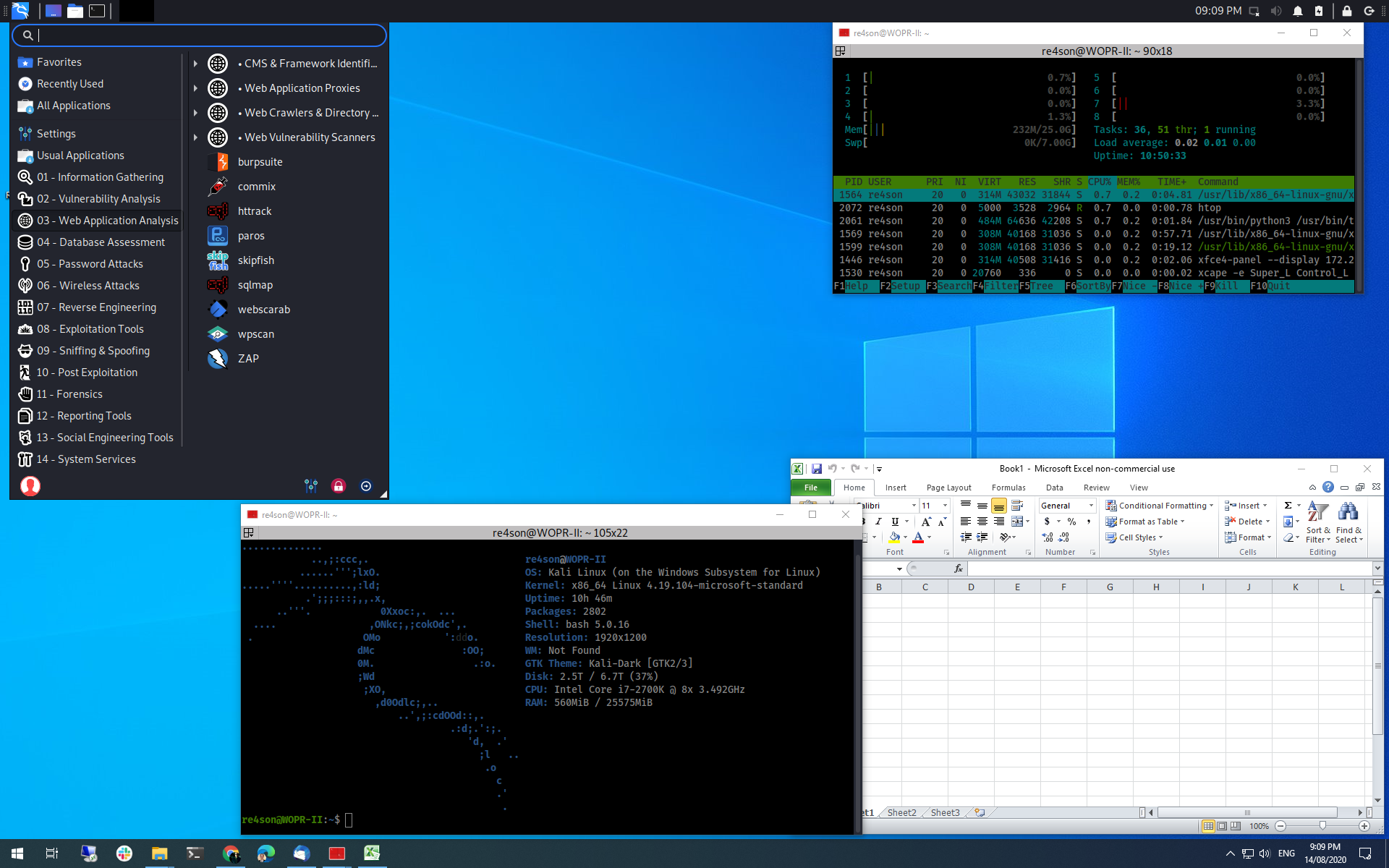 Kali Linux has been regarded as the best Linux distribution for Penetration Testing for some time now. It comes with a large suite of tools and dedicated support. For people in the Cyber Security field, it is an indispensable tool to have and know how to use. In my previous blog I explained how to configure your Windows machine and how to install the Kali distribution for easy access via the WSL. Since then, the people responsible for developing Kali have worked hard to make it even easier to manage for us, the simple Windows users.

The Win-KeX tool, developed by Kali, provides users with a way for us to run the Kali Linux distribution in Windows, with the extra bonus of having a GUI (or as they put it "a Kali Desktop Experience"). To be able to use it, the Windows machine needs to have Windows Subsystem for Linux (WSL 2), so we can enjoy some great features:

First, we need to be sure we have the last version of WSL and then selecting which version we want to use. This can be easily done by running the following command through an elevated PowerShell:

Now we are running the latest version of the Linux kernel and we have told WSL to use version 2. Cool little tidbit: we can specify which version of WSL should be use globally, but we can also do this for each Linux distribution individually and even switch between versions on the fly. This can be done with the following command:

The next step is to install the Win-KeX tool via the kali terminal:

We update the list of update repositories Kali needs to contact to download updates and afterwards we install the tool, supplying it with the -y parameter, to tell it to say "Yes" to all installation prompts.

When the Win-KeX tool has been installed, we can run it using the kex command. There are three possible ways to run Win-KeX inside our Kali Linux distribution for Windows:

(OPTIONAL) As the Kali Linux distribution we install via the Windows Store is quite bare-bones, we might need to install all the tools separately. Luckily, there is a command we can run inside Kali to do just that:

It takes awhile and you will be prompted on multiple occasions to choose how to configure certain tools.

In the end, we can run our Kali Linux machine and make use of the multitude of powerful tools available not only in Kali, but also in Windows.

For years, hackers have been the main characters of movies, books and generally have captured the imagination of regular folks. When we see these hackers use the tools of their trade, we usually see a black screen with green text flashing as fast as possible on the screen, lost in commands and bright flashing lights. This can't be any further from reality, as most hackers will spend hours and days on end to accomplish their tasks, usually staring at a screen, using their programs of choice.
Mar 8, 2022 | 372 views

A password is like a "key" used to open a specific door or vault. In this vault, there can be different personal documents, pictures, banking information... It is obvious that a user wants its personal documents secure. If the "key", therefore the password, is easy to find, the vault can be as strong as you want, it will be easy to open it.
Oct 21, 2020 | 11783 views

A tedious step for all red-teamers is set up a system to upload payloads on the victim's machine. Kuba Gretzky, the author of Evilginx, released a nice tool to simplify this task.
Jul 24, 2020 | 1278 views