Getting started with Ansible

Ansible is an extremely powerful configuration management system. Ansible is able to perform a wide range of tasks on a large and heterogeneous ensemble of devices. Indeed, it relies on a system of modules (plugins) that allow to perform different tasks like software provisioning, system and application configuration management, application-deployment etc. Moreover, Ansible modules exist to manage a wide variety of devices like Linux and Windows computers, but also network equipment like switches and routers, kubernetes clusters and other cloud services like AWS, GCE and Azure. For this reasons, Ansible is sometimes coined as an infrastructure automation engine.

In this blog post we will show how to get started with Ansible. For the example we use servers running Ubuntu 22.04.

With Ansible the master, called 'control node' pushes the desired configuration to the 'managed nodes'. The main advantage is that there is (almost) nothing to install on the managed nodes: Ansible uses SSH to connect to the managed nodes (so there must be an SSH server installed), and python to run the modules.

The drawback of this architecture is that the managed nodes must be reachable from the control node. So it is not optimal if the managed nodes are hidden behind a NAT, or only intermittently available (like laptops).

Easiest way to install Ansible on the control node is using apt:

By default, Ansible assumes you connect to managed devices using ssh keys. So you should first generate a ssh key pair on the control server:

For this example, I will create a dedicated user for ansible (but this is not required):

The user must have administrator privileges:

And to make management easier, I will configure sudo such that no password is required for user ansible:

and add the following line at the end: 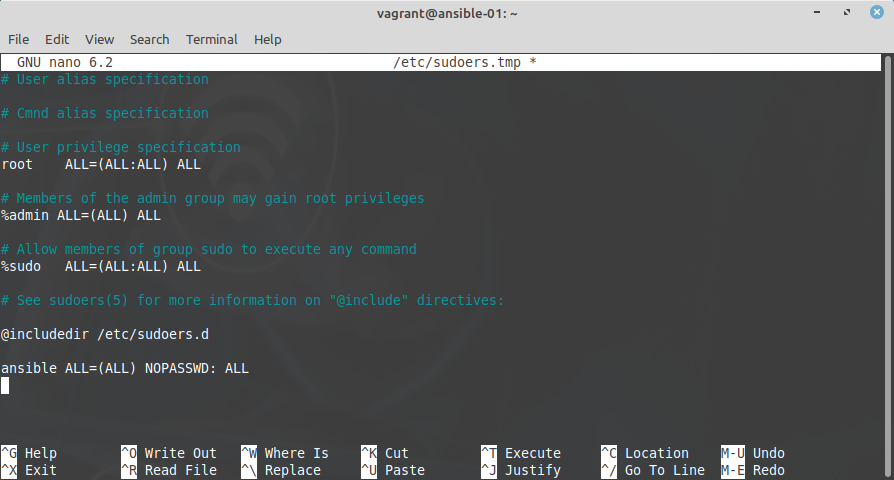 Now, back on the control node, you can copy the public ssh key with 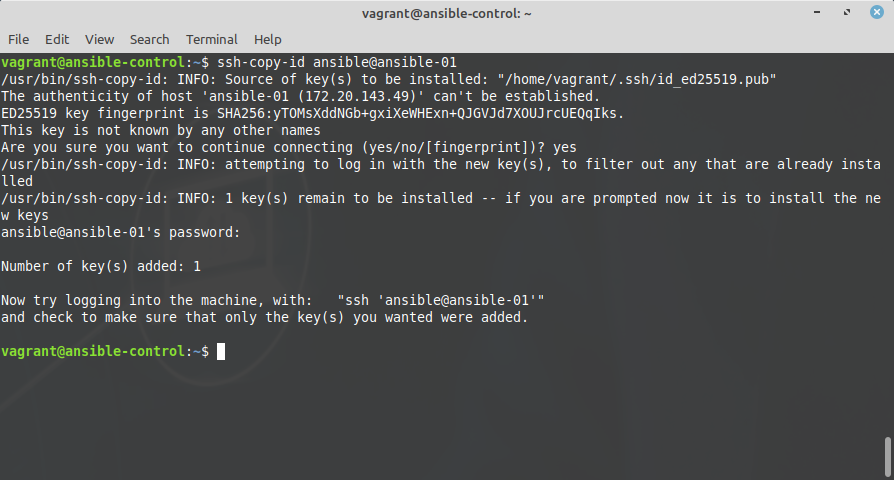 The inventory is a simple ini file that lists all devices to configure. You can use hostnames or IP addresses, and similar devices can be grouped together. By default, Ansible will look for the inventory at /etc/ansible/hosts, but you can choose another location...

The inventory also allows to define some variables for each device, or for a group of devices. In the example below we indicate which user should be used to connect to the devices (with ssh): 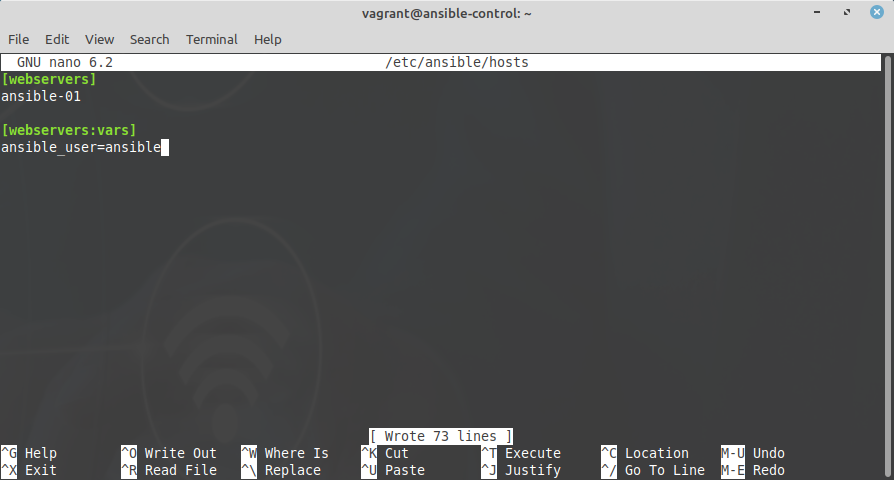 You can find the complete list of inventory possibilities in the documentation of Ansible inventory: https://docs.ansible.com/ansible/latest/user_guide/intro_inventory.html

You can now run tasks on your devices using the ansible command. It has one required argument : a pattern to define on which hosts the task must be executed. You can use a hostname, a group name, an actual pattern, or simply 'all'.

As an example (and a test), you can execute the ping module against all devices with: 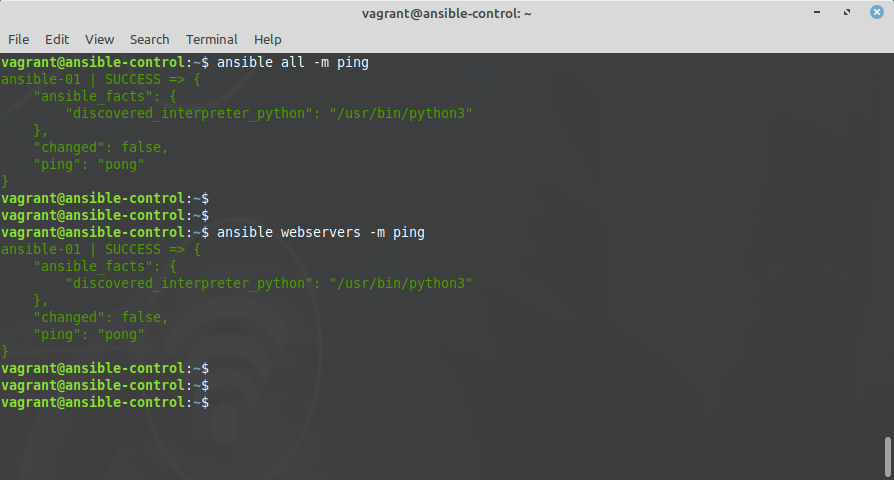 If needed, you can also run a direct command with the -a parameter:

To perform configuration management, the desired configuration of the devices should be described in text files. This is the role of playbooks...

A playbook is a yaml (text) file that describes the desired configuration of devices. For example:

As you can see, the playbook:

For example, the copy module allows to upload files from the control node to the managed nodes. You can find a list of available modules at https://docs.ansible.com/ansible/latest/collections/ansible/builtin/

See that this time the copy module notifies the handler "Restart apache" if the module has caused a modification on the device.

You can run a playbook with

Moreover, Ansible modules are smart enough to check if they cause a modification on the device. If you run the playbook above multiple times, apache will be restarted only if the configuration file has been created or changed on the managed device.

You can find more information about handlers in the documentation: https://docs.ansible.com/ansible/latest/user_guide/playbooks_handlers.html

When your infrastructure evolves, your playbook will become very large and complex. Hence you will usually organize your Ansible configurations with:

Here is an example of a playbook:

For each role, Ansible will look for role files:

Then, for each role, Ansible will look for

So you could reorganize the previous example as follows:

Roles are fully described in the documentation of Ansible: https://docs.ansible.com/ansible/latest/user_guide/playbooks_reuse_roles.html 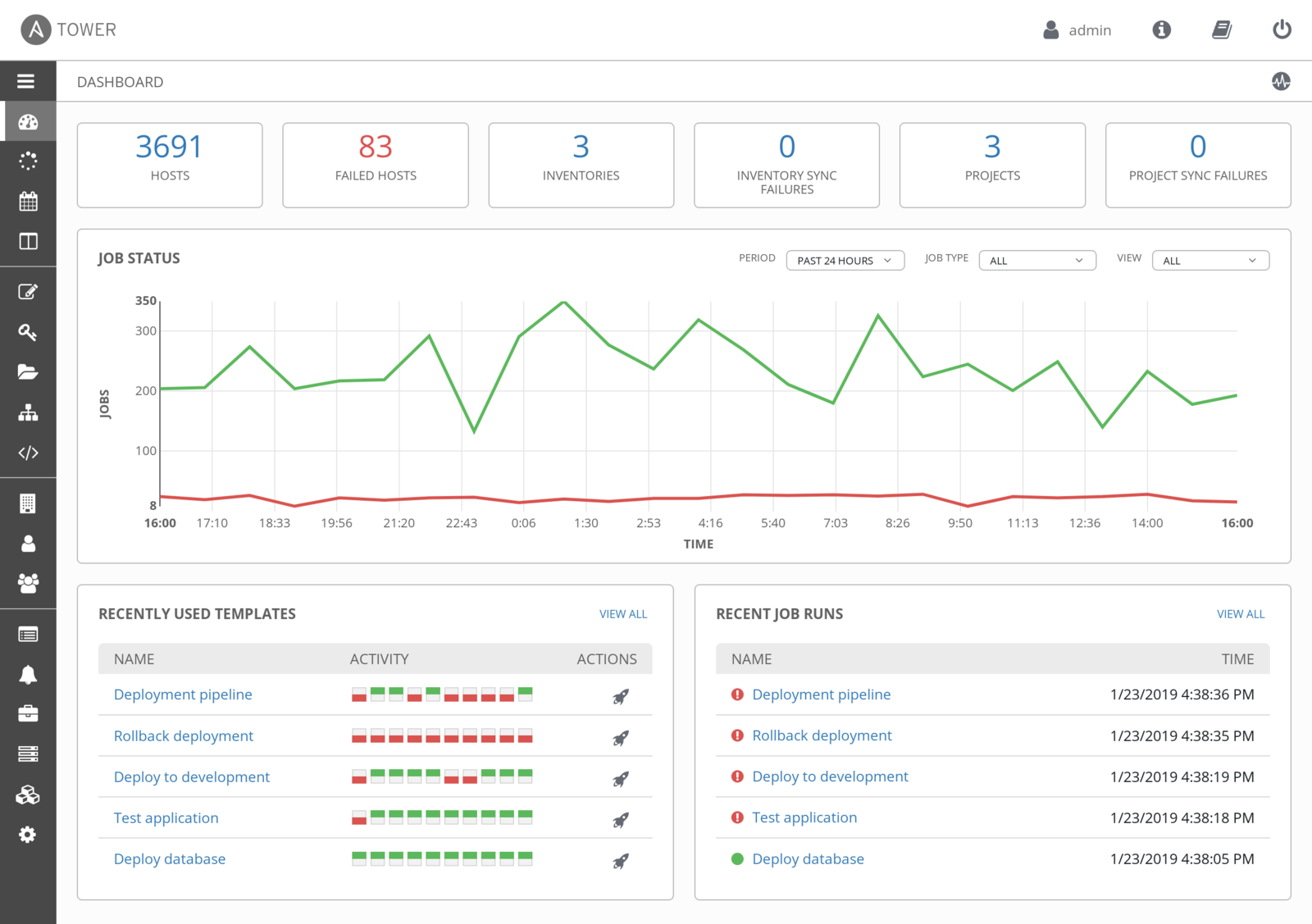 There is also an open source project called Ansible Semaphore that provides a similar web interface for Ansible. 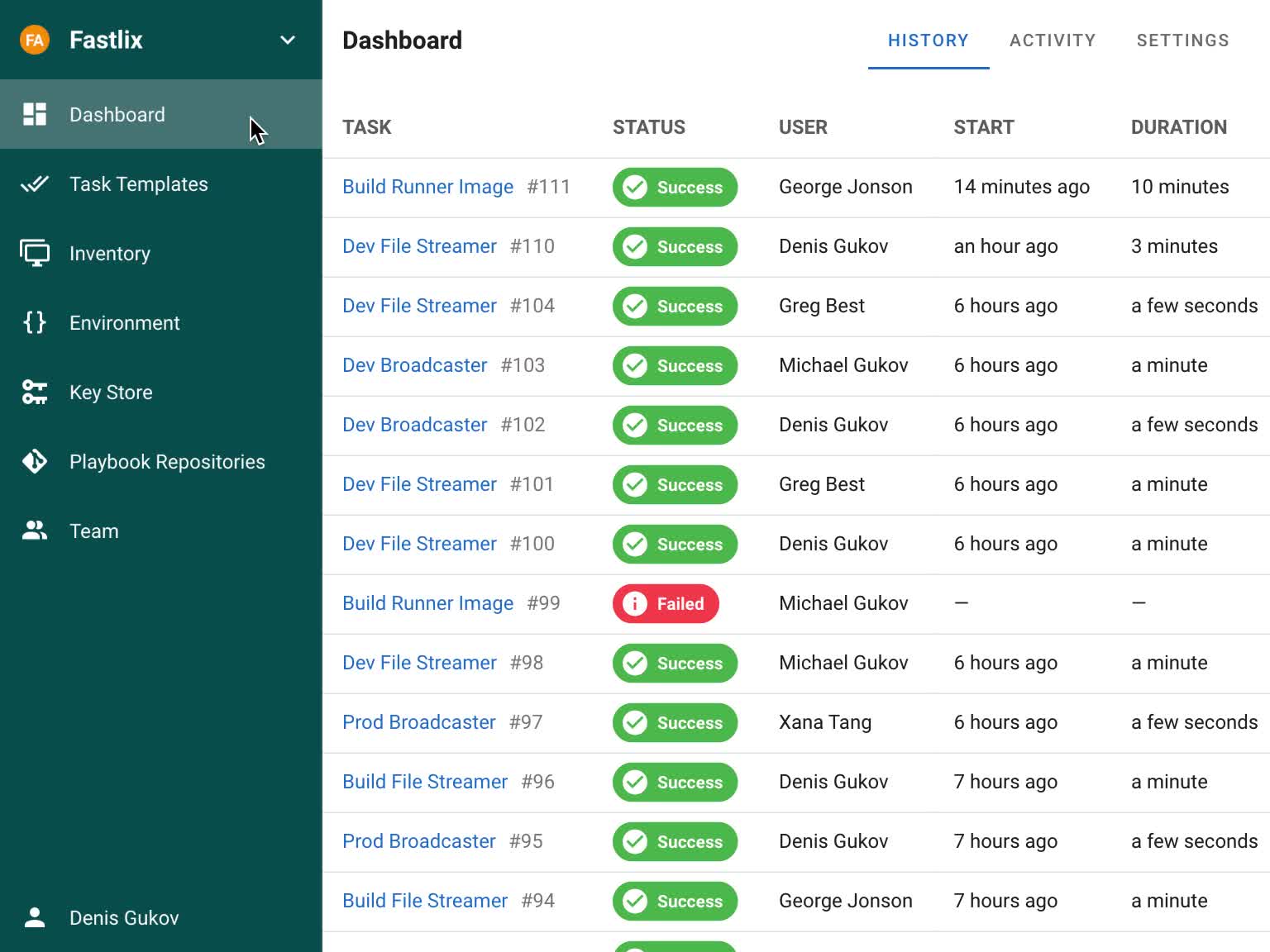 Filter USB devices with udev (and some PHP code)

USB devices can be a liability : they can be used to exfiltrate data from a computer or server, to plug a hardware keylogger, or to plant a malware. Hence on a managed computer, USB devices should be filtered and whitelisted. In this blog post we show how this can be achieved thanks to udev, and some PHP code.
Dec 23, 2022 | 403 views

Install and use different versions of PHP