GitLab is a git repository management tool, like GitHub or BitBucket. Like them, it offers issue tracking and wikis. However, GitLab also offers some very powerful features like Continuous Integration (CI) and Continuous Delivery (CD). 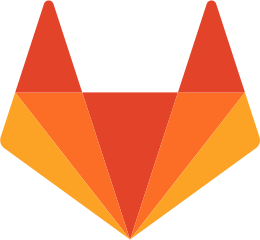 In this post we will cover the main features, to provide you with a quickstart! 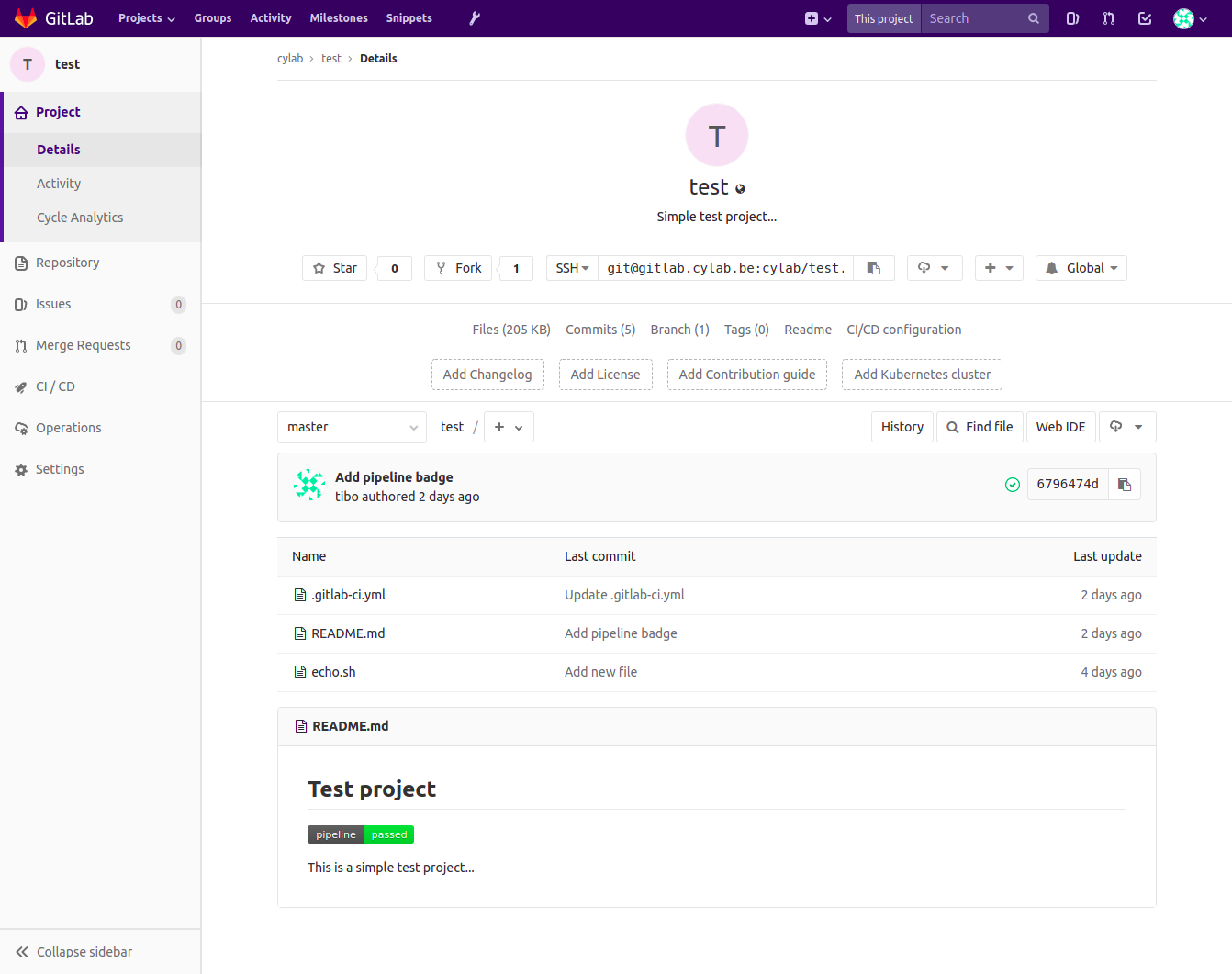 This is the main view of a project. It allows to browse and modify the different files of the project. Just like GitHub, the README file is rendered to display an overview of the project.

The Repository menu (on the left) allows to browse the commits and branches of the project, and also to display them as a graph. 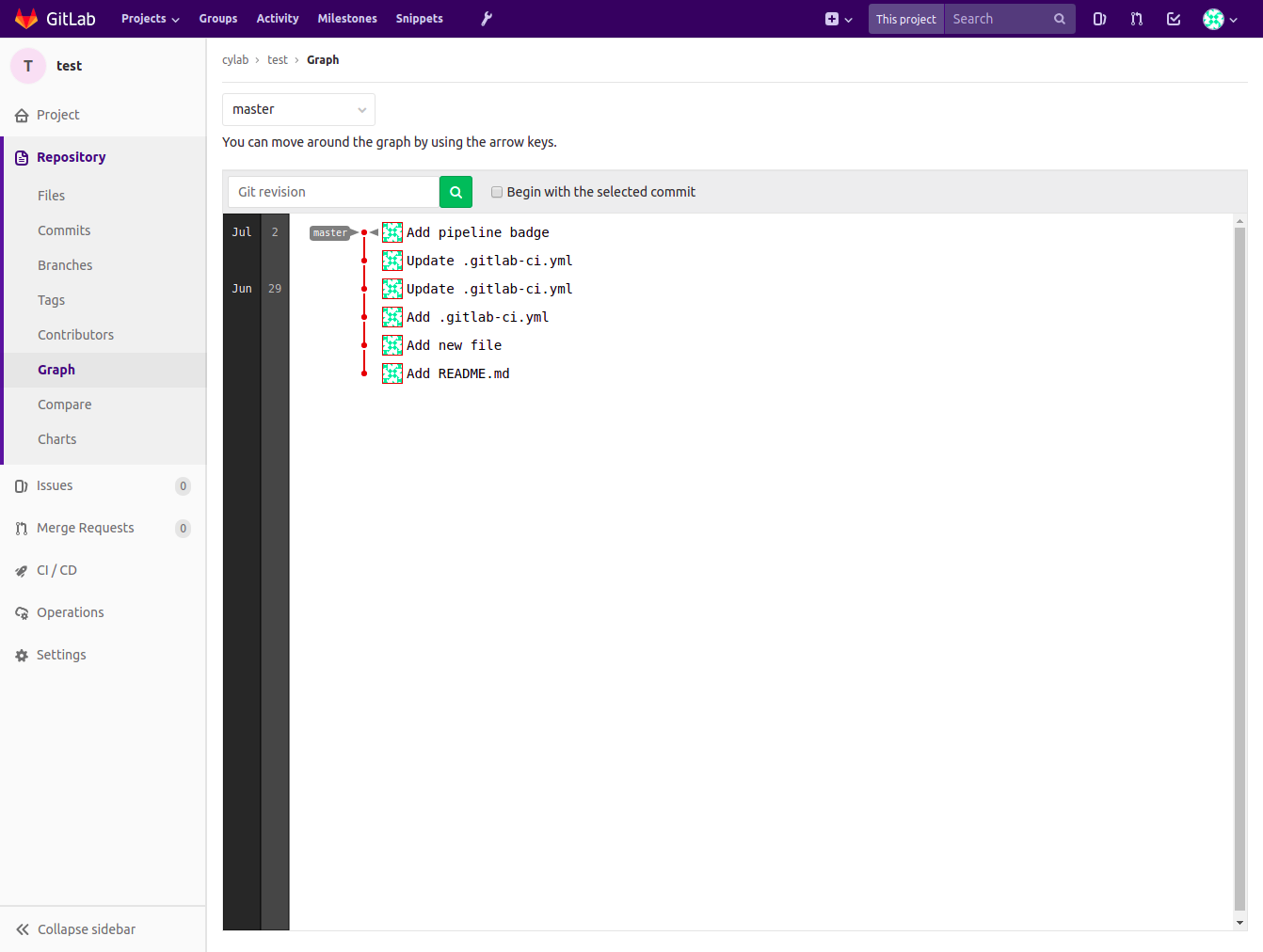 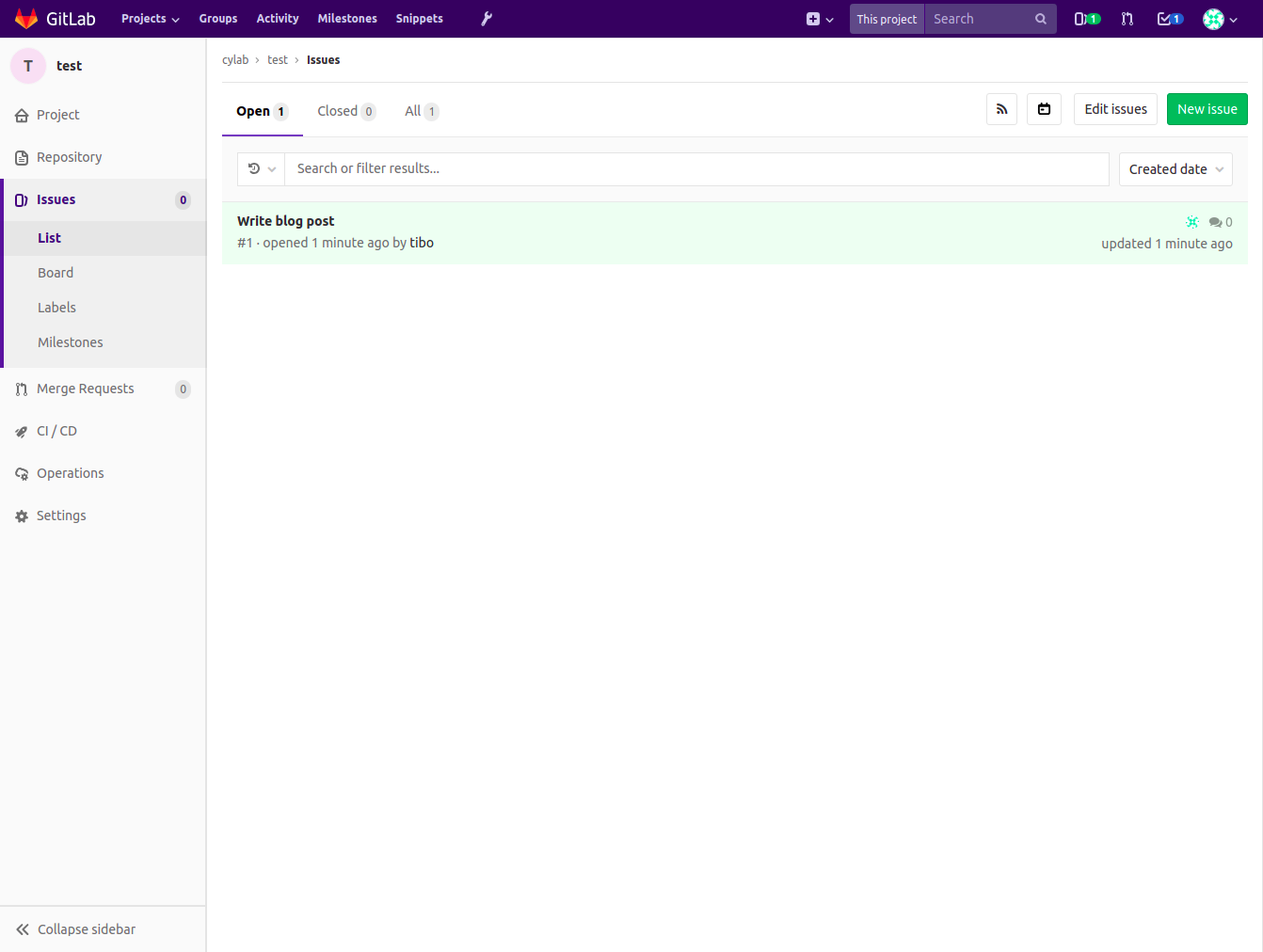 Issues can be closed directly by committing to the git repository, with a commit message like "Fixes issue #1". By default, all keywords like Fixes, Fix, Closes, Resolves and Implements can be used.

GitLab also has a Board view of issues, which allows to use the SCRUM methodology for managing the project. 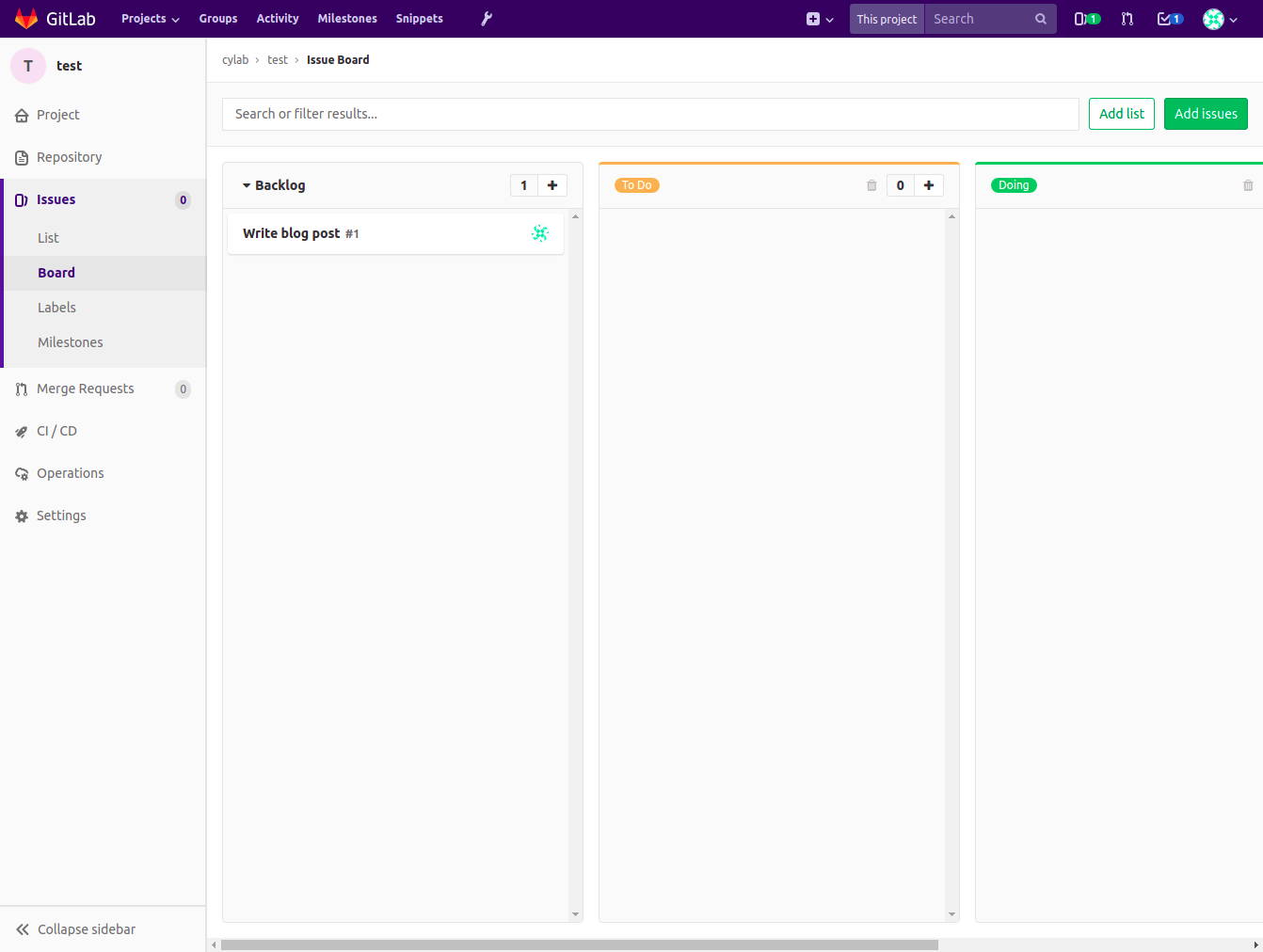 This is one of the main strengths of GitLab: it has a Continuous Integration engine that runs tests each time commits are pushed to the repository. This is a like a built-in travis-ci or Jenkins!

The tests are actually called jobs. These jobs are usually executed by workers using docker containers, but other tools can also be used, like VirtualBox images.

A single execution of all the jobs defined in a project is called a pipeline. 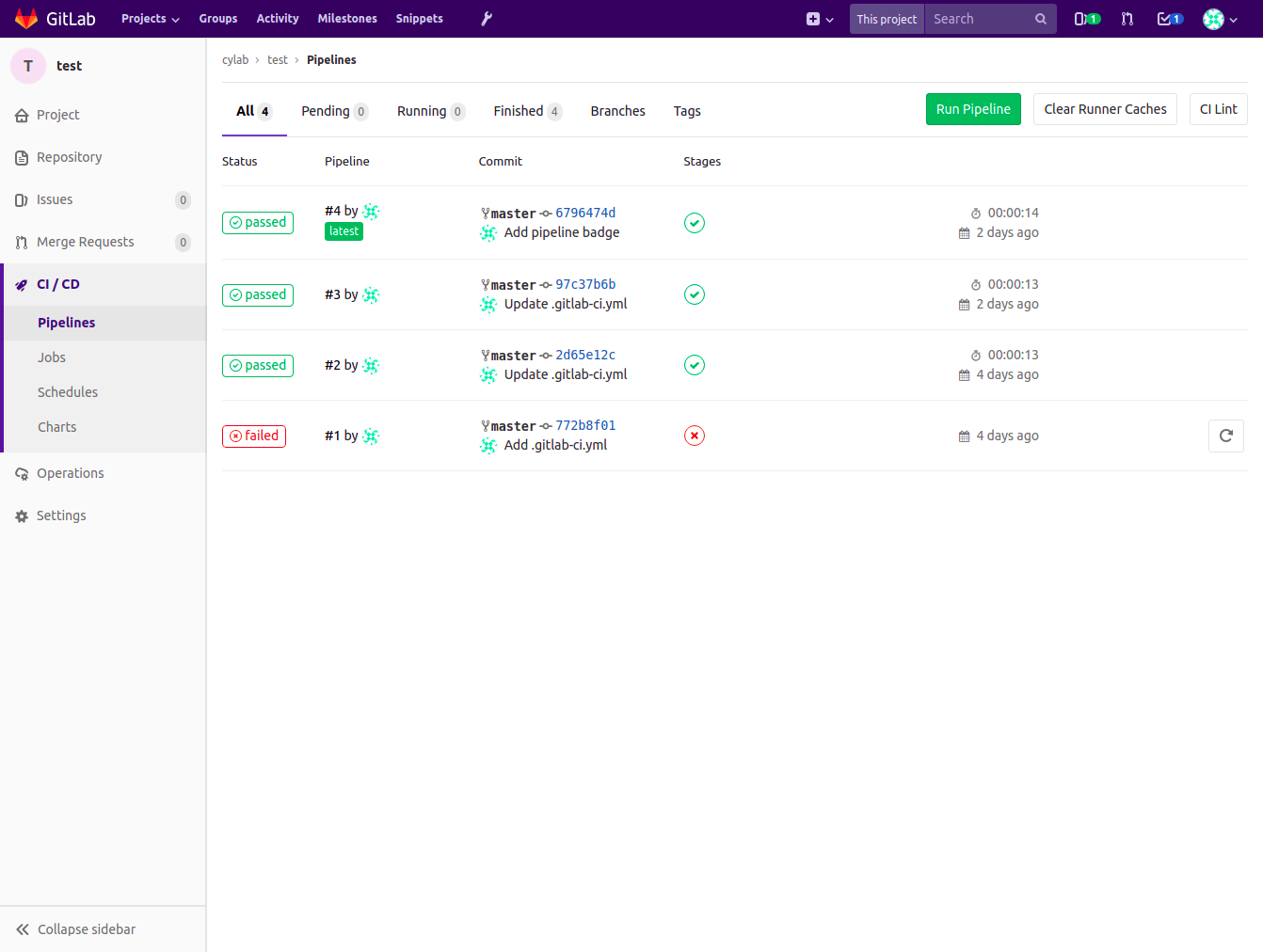 The jobs that have to be executed are defined in a file called .gitlab-ci.yml located at the root of the project. Typically, this file defines:

Usually, the different options like image or before_script can be defined separately for each job, or globally for the complete pipeline.

The test job will fail if the script command returns anything but 0.

GitLab even provides a visual representation of the different stages and jobs in the details of the pipeline: 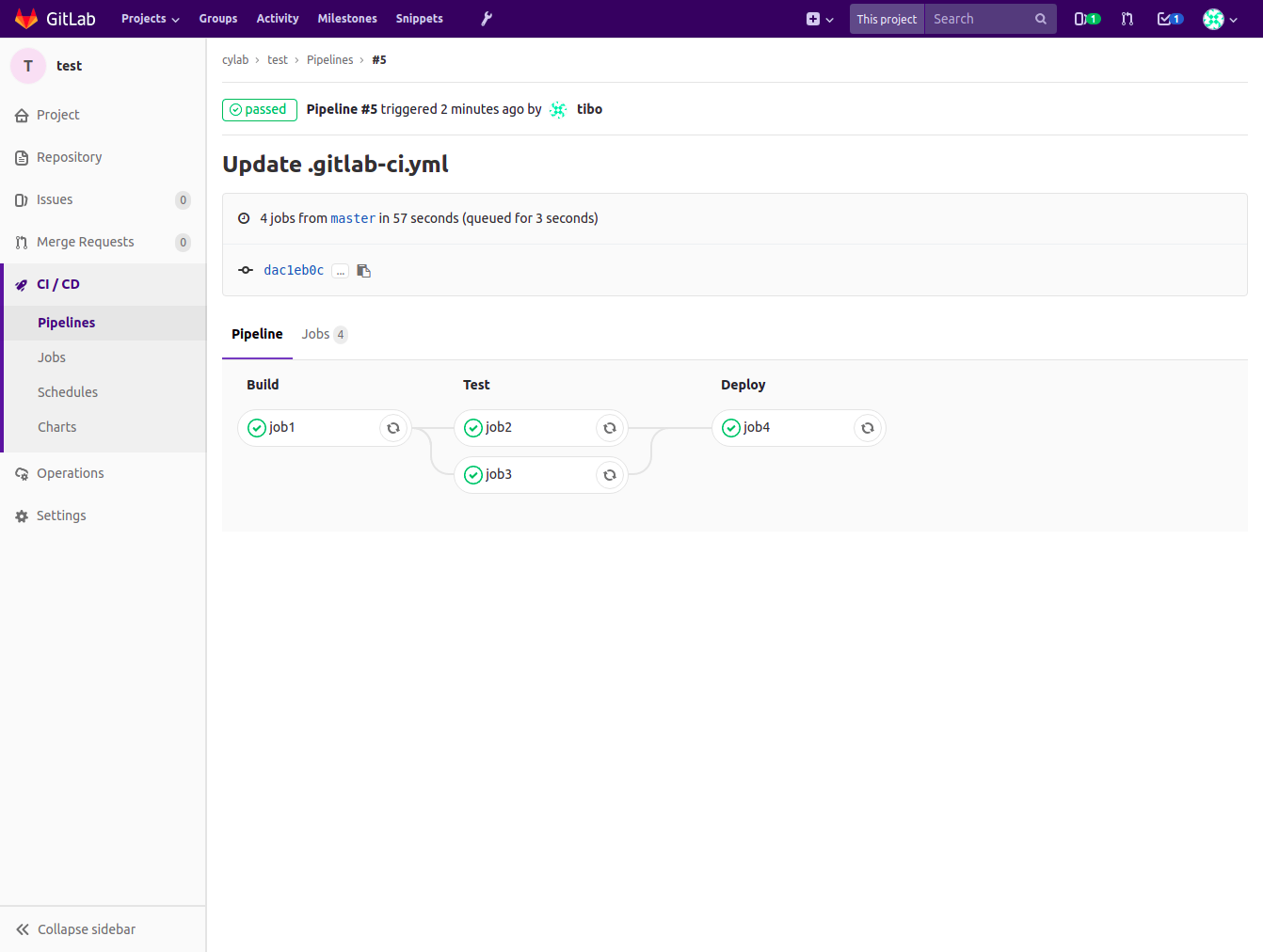 This is a typical .gitlab-ci.yml for a PHP project

To speed-up your tests, you can use a docker image that already has all required tools and extensions installed:

Here is a simple example .gitlab-ci.yml for a java/maven project:

GitLab has a built-in badges generator to easily display the status of your pipeline and the current code coverage of the tests in your project. You can find it under Settings > CI/CD > General pipelines settings

GitLab can be easily integrated with external tools using webhooks, services, deploy keys and pushing to a remote repository.

Webhooks allow to trigger an action when commits are pushed to the repository by performing a HTTP POST request to a predefined URL. You can configure webhooks under Settings > Integrations.

Services are plugins built in GitLab to trigger actions in different external tools like Slack, Packagist, Bugzila, JIRA and many other. You will find them under Settings > Integrations as well.

Deploy keys will allow external tools to access your private repository. You will find them under Settings > Repository.

The pushing to remote repository feature allows, as the name states, to propagate modifications from the GitLab repository to an external GIT repository. This is useful for to clone your repository on GitHub, for example.

If you are using Docker and Kubernetes to run your production apps, GitLab can automatically build, upload, deploy and configure your containers, and monitor the state of your running containers. This allows to centrally manage the complete development and deployment process. 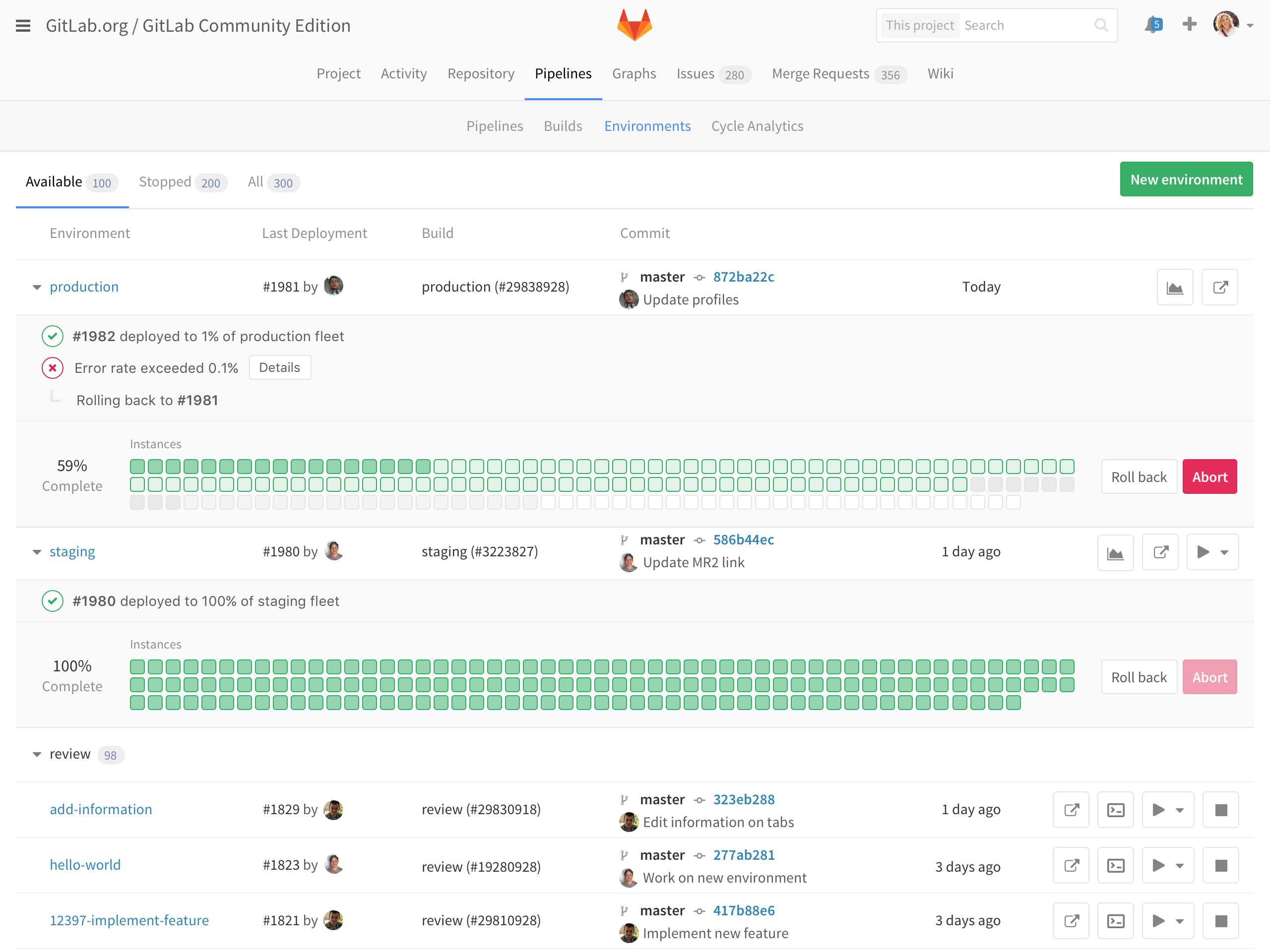 Learn how to secure any project with the GitLab SAST analyzers and easily separate the false positives from the real threats that should be addressed before deploying the project.
Oct 28, 2021 | 5541 views

GitLab is a very powerful tool, and it also implements decent security measures and protections. But still, by default all your work on GitLab is protected by a single password, which could be guessed or stolen. To add an additional layer of protection, you can (and should) configure 2-Factor Authentication (2FA).
Aug 20, 2021 | 2763 views