By default, Laravel (and Bootstrap) applications use fonts (like Nunito or Raleway) that are provided and hosted by Google. This is easy to use for developers, but comes with some drawbacks, including a performance penalty. Luckily, there is an open source project that makes it simple to use self-hosted fonts: fontsource.org

Updated February 2022: A German court sentenced a website that used Google Fonts for transferring a user's personal data (his IP address) to Google without the individual's consent. One more reason to use self-hosted fonts!

Finally, fontsource.org is a repository that contains fonts from Google, but also provides lots of other open source fonts.

To illustrate the performance impact of using self-hosted fonts, here is the analysis of a simple web application, performed with https://www.webpagetest.org/ For the test we chose to simulate a mobile user, connected through a 3G.

The waterfall diagram below reveals that this page requires to download 2 render blocking resources:

These are render blocking resources. Hence, as long as these 2 resources are not downloaded, the page remains desperately empty and white for the user. This means we can drastically improve the user experience by removing the call to fonts.googleapis.com!

On https://pagespeed.web.dev/ Google itself recommends to get rid of Google Fonts!

Fontsource is actually a collection of npm packages. You can find the list of available fonts at https://fontsource.org/fonts

Then you can import the font in resources/sass/app.scss, and remove (or comment out) the import of the Google Font :

Now we can recompile the resources with npm:

Finally, we can remove the lines related to Google fonts in resources/views/layouts/app.blade.php :

We can also use our font in any CSS file:

With self-hosted fonts from fontsource, we can see there is only one blocking resource (app.css) left. This means our application is now rendered after 1.9 second.

And you'll also get a nice performance score on Google PageSpeed: 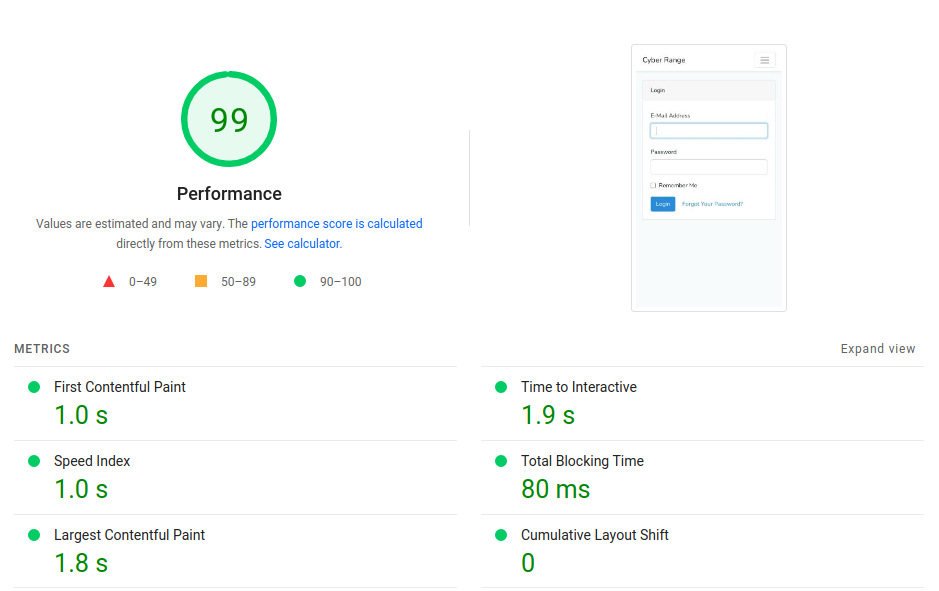 If it is not done yet, you can also:

With recent events on Twitter, the micro-blogging network Mastodon has gained a lot of interest. Unlike Twitter, Mastodon is free and open-source software. Moreover, Mastodon uses a decentralized approach: the Mastodon network is composed of multiple instances managed by different suppliers, each with its own code of conduct, terms of service, privacy policy, privacy options, and moderation policies. If you want to support the network, here is how you can add 'Share on Mastodon' icons on your website.
Dec 18, 2022 | 544 views

2-factor authentication is an important protection for a web application. In this blog post we see how Time based One Time Password (TOTP) authentication works, and how it can be implemented in a Laravel application...
Oct 23, 2022 | 792 views

Laravel is a powerful framework, that offers all functionalities required to implement file upload, validation and storage. Here is a complete and concrete example.
Jun 17, 2022 | 3966 views